Ever had an old and battered van to try get rid of, when the time came for something new? If so, you’ll know it can be a challenge to advertise it in a way to get people interested. There’s no good way of saying 250,000 miles, several dents, and needs new clutch and gearbox!

Some people take a humorous approach, that at least gets their advert noticed, even if it’s still hard to find a buyer. To show what we mean, here are three funny van ads that were all placed on DoneDeal in recent years:

Somebody called Pádraig tried to sell this 1996 Ford Transit. He had an asking price of €650 but said he’d consider other offers too. Here’s what his ad said:

She’s in great running order but ‘The Man’ says I need some paperwork to put her on the road. She needs a bit of love to get her through the DOE but I may as well be looking at a cow’s arse as trying to fix her myself and I haven’t a notion of paying a mechanic to do it.

The last owner stuck four alloys off a Landrover on it for some mad reason. Suppose he thought it would make her go faster or something. I don’t get it myself, each to their own I suppose. The inside in the back is painted with anti-bacterial paint (whatever that is). Handy if you want to convert it to an ambulance or transport organs.

Anyway give me a shout. Make some kind of offer, but no messing. I’m saving up for an iPad with all the bells and whistles so could do with a few quid. The nephew had one, they’re some job in fairness.

Offers accepted, but lads, ye better be standing in front of me with a big wad of cash when ye do it. 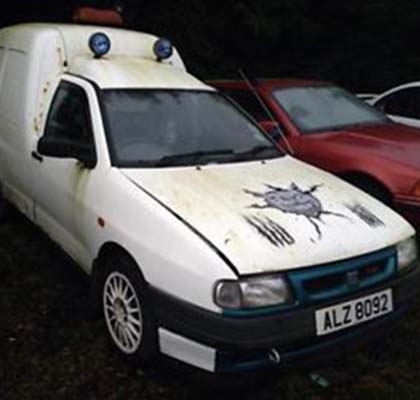 Then there was this guy in Newry, who was trying to sell a 1997 Seat Inca. His ad was VERY long, but highlights included:

I bought it off a foreign lad and I was driving away at it until I had to let it lie low for a couple of days after a bit of a row outside the Relic one night. To put a long story short, some lad took the hump when my friend took a liking to his girlfriend. Stuff went down and the van hada be kept outa the road. It’s all good now so I wouldn’t be worried if you’re cruising about the town.

Says straight diesel in the book but Turbo Diesel engine fitted so she’s a good bit faster than  straight diesel. I raced a 130 brake golf one time and he couldn’t get away. In saying that now, I’d be a brave good pilot so maybe that had something to do with it, but still, hanging on to a 130 brake golf is no mean feat. It shows ya the van’s fit for it with the right man behind the wheel.

I’ll need £250 if you want alloys, beacon and wind deflectors. £200 without them. I’d be interested in a swap if you have something interesting. No phones unless they have 250 quid of credit in them. Quads, scramblers or mountain bikes maybe. Thanks for looking.

The last of our funny van ads is this one placed by a guy in Laois, who had the Mercedes Sprinter that features in the main image above.

He’d converted it into a camper van, and claimed it was a real ‘passion wagon’. Some of his statements were a little inappropriate, but the ones about the van itself included:

She has been all over Ireland and beyond, from fleadh ceoils to matchmaking festivals.

She’s a bit rough around the edges. Starts and drives okay but doesn’t stop. Radio works too. Gearbox is sound but needs encouragement to get it into reverse. All lights working though!

She is a camper on the tax book but a rocket sledge on wheels.

Ideal for glamping. Genuine callers only.

That van really did sound like the stuff of legend!

You might never end up having to write funny van ads yourself, but we know that whatever van you do drive, you need the best van insurance at the best price.

That’s why we advise you to get a quote from us here at www.insuremyvan.ie

We deal with all the major insurance providers in Ireland to get you the best quote. We regularly deliver savings of 25% or more.

Other benefits of choosing www.insuremyvan.ie for your van insurance include:

Ready to save money? Get your van insurance quote now!