Commercial jeeps are super popular in Ireland, and for good reasons too: we have a lot of tradesman, farmers and small businesses who need a reliable light commercial vehicle that can access even the remotest countryside areas. In 2022, Insure My Van have seen an increase in insurance quotes for commercial jeeps.

What is a 4×4 commercial vehicle, and why do you need it?

Here is a scenario, you work at a tech company and own a sedan car, and most use of the car is to travel from work to the office and a few getaways during the weekend. Given this, you will not need more power, you will not need a 4×4 car.

But here’s another scenario. You are a farmer and require a powerful vehicle to transport your goods from place A to place B, would you still prefer a sedan? Obviously not. Especially if place B is a remote location with a dirt road. That’s the reason we spot so many Irish farmers driving commercial jeeps on our roads.

In a 4×4, also known as 4WD or 4-Wheel-Drive or jeep, the engine provides power to all four wheels of the vehicle, making it a popular choice for commercial vehicles. The design aspect of a 4×4 is also different compared to conventional rear-wheel drive. In a 4WD vehicle consisting of a pair of axles helps improve the torque of the wheels, depending upon the driving condition.

Additionally, the actual cab is typically better equipped than even a very fancy van because the only interior modifications compared to the non-commercial version occur behind the front seats. There are many comfort and safety features in commercial jeeps nowadays, so longer drives won’t be an issue anymore. 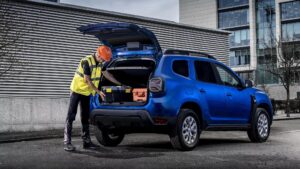 Early in 2021, the second-generation Dacia Duster Commercial was unveiled. Only the highest-equipped diesel variant has four-wheel drive.

The entire vehicle is actually so light that it meets the criteria for a car-derived van, something that the other commercial jeeps can’t brag about and which may be advantageous for the higher speed limits this enables.

Its starting price in the 20k region makes it the best low priced and most affordable mainstream new commercial jeep available right now, and as a result, it offers excellent value. The maximum payload is about 495kg, and the load area is 1.3 to 1.5 cubic meters in size. 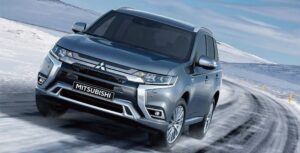 The Mitsubishi Outlander PHEV is still an excellent choice for a commercial jeep, despite the fact that due to the company’s decision to leave Europe, the access to its best commercial 4×4 models may be restricted if you wish to buy new.

The Outlander is arguably the best of Mitsubishi’s commercial jeeps, but it’s also the one that’s possibly more fascinating. There is a great deal of intricacy beneath it, which is why it is only offered as a petrol-electric plug-in hybrid right now. If you can make the most of the pure-electric driving range, which is only around 30 miles per charge, fuel economy is outstanding, but longer trips can get expensive.

The most recent PHEV model has a 1,609-liter load space and a 510kg payload (just over 1.6 cubic metres), At the debut, a diesel version was offered; if you’re interested, you should be able to find a used one. 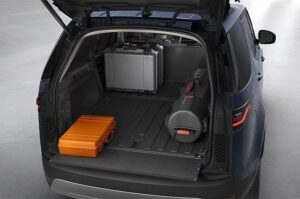 One in every four of these Land Rovers sold in the UK and Ireland is reportedly a Commercial model, thus the price is not discouraging buyers. Although they don’t appear to be commercial vehicles from the outside, the Special Vehicle Operations division of LR managed to make them very useful inside.

The Land Rover Discovery Commercial is also an incredibly well equipped jeep, with a ton of standard equipment on even the base model, such as a motorised tailgate and a spectacular infotainment system. In addition, they travel better on roads than the Defender Hard Top (albeit there isn’t much in it) and are also very capable off-road.

Although smaller engines are still available in used jeeps, only the incredibly powerful D300 mild-hybrid engine is now available, with 306 horsepower and a 0-62 mph time of 6.9 seconds. The payload is an amazing 784 kg, and the load space’s volume is officially 2,024 litres (just over 2.0 cubic metres). 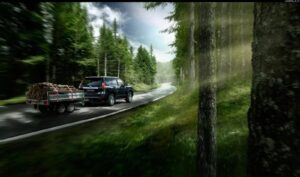 The Toyota Land Cruiser Commercial is the only other commercial jeep that can compete with the Land Rover Defender Hard Top 4×4 in terms of capability and design. Similar to the Defender, this commercial model is based on a tough off-road jeep version and is available in three-door SWB and five-door LWB body sizes. Probably the best commercial jeep 4×4 for endurance and no-nonsense capability.

These jeeps have unexpectedly beautiful on-road manners despite being incredibly competent off-road; the basic vehicle feels comfortable in the roughest settings possible. If you don’t need a cargo capacity of 1,000 kg, they are an interesting alternative to the Toyota Hilux pickup thanks to its 2.8-liter powertrain, which makes them incredibly speedy.

The SWB (Short Wheel Base) variant can accommodate little under 1.6 cubic meters, while the LWB (Long Wheel Base) version has a load space of almost 2.2 cubic meters. Payload, which ranges from 488 to 593 kg for the smaller model and 661 to 756 kg for the bigger one, is spectacular too. A great commercial jeep option if practical dependability is your top priority. 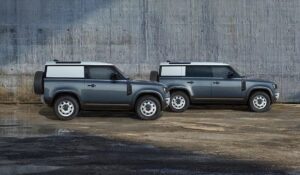 With this brand-new Hard Top model, the Defender made a triumphant comeback to the commercial 4×4 market in 2022. The label “Land Rover Defender Hard Top” is only applied to the this variant; unlike some earlier models, the roof is not genuinely detachable. This champion commercial jeep is mostly known for its all-rounder fame and Insure My Van provided commercial vehicle insurance to a significant number of this model in 2022.

The SWB Defender 90 Hard Top and the LWB Defender 110 Hard Top are available in two sizes, with the latter being based on the five-door model and the former on the three-door. Although their retro-inspired exterior and interior designs may initially look a little cheesy, they are both a ton of fun to drive on the road and amazing off-road.

Additionally, its practicality as a commercial jeep is unmatched. The Defender jeep offers plenty of storage options, a 3,500kg towing capability, and is the only commercial 4×4 with a three-seater cab option. Maximum payload is 888kg, while cargo capacity is 1,355 litres in the 90 and 2,059 litres in the 110. Even though it’s expensive, it feels like a good investment for all the farmers and tradesmen out there looking for commercial jeeps.

And, if you decide to buy a commercial jeep or already have one, Insuremyvan.ie can give you the best commercial vehicle insurance in Ireland, just fill in our online quote form or contact us. For inquiries regarding passenger vehicles, try Coverinaclick.ie to get some of the cheapest quotes for car insurance in Ireland.